As part of the Platform Genolier Foundation, our program to support NGOs in Switzerland and around the world, we are pleased to open access to voluntary missions for doctors, healthcare staff, hotel staff and administrative staff of Swiss Medical Network. Genolier Foundation has decided to support the prestigious organization Mercy Ships for its missions in Africa and the International Foundation for Population and Development (IFPD) for its missions in India. Other opportunities for volunteering abroad or volunteering in Switzerland will be added, depending on the needs of our NGO partners.

Hospital ships at the service of the most deprived

Two out of three of the world's population, or about five billion individuals, have little or no access to necessary surgery or medical treatment. This was the shocking conclusion of a study recently published in medical journal The Lancet.

Mercy Ships uses hospital ships, from which it offers more than 1500 surgical procedures and 8000 dental treatments every year and free of charge to those who have no access to them in developing countries. On top of this, Mercy Ships supports the health system in the host country through training and renovation of its medical infrastructure. Using the world's largest, non-government-owned hospital ship, the Africa Mercy, Mercy Ships works closely with host countries to help them improve their health systems.

Every year, several hundred volunteers from more than 40 nations offer their services to Mercy Ships. Professionals such as surgeons, dentists, nurses, healthcare instructors, teachers, chefs, mariners, engineers and agricultural experts willingly give of their time and expertise to help transform the lives of some of the planet's most impoverished people and offer them new hope.

Founded in Lausanne in 1978, Mercy Ships is an international humanitarian organization based on Christian values. Over the past 40 years, it has worked in more than 70 countries, providing services worth over one billion dollars that have included more than 91,000 surgical procedures and 163,000 dental treatments.

Mercy Ships is recognized as a charitable organization.

IFPD is a development NGO and strives to contribute actively to the elimination of poverty among the most vulnerable groups in developing countries and in Switzerland. IFPD implements an innovative and sustainable economic model to promote social entrepreneurship and support development projects. To this effect, the Foundation works as a facilitator for the creation of local income generation sources with a view to guiding its beneficiaries towards financial autonomy, and perpetuating poverty reduction programs in the long term.

The project planned by Genolier Foundation and IFPD is aimed at the early detection of diabetes, hypertension and depression among the underprivileged population in the slums of Delhi (India). The project will be carried out in collaboration with Agragami India, IFPD's partner organization in India. It focuses on routine screening, early detection and treatment of said diseases as well as on the provision of preventive measures. IFPD and Agragami India will be responsible for all awareness, follow-up, logistics and monitoring activities at community level. Volunteers of Genolier Foundation will be in charge of training local actors to provide them with the skills needed to implement the project.

Aboard the Mercy Ships Africa

Aboard the Mercy Ships Africa: an experience quite out of the ordinary

"May 2018. When I’m invited to join the Mercy Ships moored in Douala (Cameroon), I feel a certain apprehension. Although I’ve seen plenty of photos of this hospital ship, I still cling to many preconceived ideas: a creaking old liner, seasickness, an overrun, patchily equipped hospital, patients with rare and severe diseases, the risk of malaria, or even kidnapping by a terrorist group with an appetite for humanitarian aid workers. Despite all this, I make my preparations for a journey that will, in a subtle way, completely shake up my vision of altruism. After a pleasant flight, Douala airport awaits me. The port is only about twenty minutes away by car, and we travel in an impressive Jeep painted in the Mercy Ships colours. Once we’ve arrived at the quayside and passed through two checkpoints, the Mercy Ships Africa looms into sight. An immense white liner, it is, a former ferry that has been refitted and refurbished to its gleaming, magnificent state. Pitched around it are three or four inflatable tents for the dispensing of medical aid, as well as a long wooden shelter where a few patients are waiting for their consultation as twilight falls on a day of still scorching heat."

A unique way of life on a floating campus

"First surprise: upon boarding the ship, I find the kind of fresh, clean space you would expect on a cruise liner. The cafeteria is immense, and two buffet bars groan under the weight of a rich variety of delicious foods. On the lower deck of the ship, I discover a hospital floor. The other decks are shared and resemble an enormous campus teeming with dozens of aid workers, doctors, carers, logistics personnel, administrative staff and many others. When I subsequently make a detailed tour of the ship, I find apartments housing entire families, some of whom have been there for fifteen years. There is a school catering for all ages from nursery class to the end of secondary school, a space equipped with computers, a number of comfortable lounges, a small swimming pool on the top deck and, by some surreal twist, the only Starbucks in Africa plonked right in the middle of the atrium where it acts as a meeting place at every hour of the day. A calm, peaceful atmosphere reigns aboard the Mercy Ships, where 400 volunteers of all nationalities live together as part of a very American organization, smooth-running and perfectly managed and structured. Many of the humanitarian aid workers I meet aboard the Mercy Ships have been there for many years, whether alone, as a couple or with their families. Due to their status, they claim no payment whatsoever even though they still pay the costs associated with their stay (accommodation, food). And they have a unique way of life: even though the framework in which they act remains the same – same workplace, same restaurant, same neighbours, same apartment – their external environment changes every year as the Mercy Ships Africa makes its way around the continent’s coastline. This is clearly a unique existence."

The Swiss community, a close and welcoming circle

"The Swiss community, which when I arrive consists of some forty persons, has assembled to give us a genuinely warm welcome. I am surprised by such attention as well as by the fact that they are there at all. This gesture touches me, and I am suddenly inspired by a genuine feeling of belonging to my country of origin. There is the sense of pride, of having a shared dialogue with compatriots who have chosen to put their well-established lives in our beautiful country on hold to offer their skills to the ill and impoverished living some 6,600 kilometres away from their homeland. Our delegation had the idea of bringing various types of chocolate, which we savour while talking about life on board and the reasons that have brought these Swiss citizens to the Mercy Ships. There, I meet a number of young people, aged between 20 and 25, who have come for their period of work experience as part of their studies at Lausanne’s hospitality management school. I ask them about their way of life. Don’t they get bored spending their time aboard a hospital ship? They tell me about their cinema evenings organized in front of a large screen erected in the seminar room, where they lie on the carpet, comfortably propped up by large cushions, their regular evening trips around Douala, always in small groups, the local market, the impromptu volleyball games on the quayside, the people they meet. Some of them speak about their religious beliefs and the pleasure they take in going to Mass every morning, a happy, song-filled occasion that floods the atrium and is driven by the enthusiasm of the chaplain, a gentle, rounded African woman wearing eccentric clothes who happily joins the various tables at meal times full of interest in our lives and our intentions."

"It is, without doubt, the smallest, the most English enclave I could hope to discover: the office of Doctor Gary Parker, better known simply as “Doctor Gary”, who has lived with his family on the hospital ship for 30 years. Unshakeably calm, a permanent smile on his face, he evokes stirs of admiration wherever he goes, thanks both to his imposing stature and his exemplary commitment. The only permanent surgeon on the ship, he carries out a continuous stream of highly complex maxillo-facial operations. In recognition of the 400 or so operations performed during the Cameroon mission in 2018, Dr Gary was honoured, exceptionally, with the title of Knight of the National Order of Valour. Around this emblematic character, numerous doctors from all sorts of countries place their skills in orthopaedics, ophthalmology, plastic surgery and dental care at the service of the deprived population, which consequently benefits from state-of-the-art care administered absolutely free. Many of them return every year, such as Prof André Mermoud, an ophthalmologist from the Swiss Medical Network. Famed both for his surgical skills and his humanitarian commitment to Africa, he has been visiting the continent as a volunteer for the past 20 years, on each occasion carrying out glaucoma operations that have saved hundreds of patients from total blindness. During their ten-month mission to Cameroon, the medical and care team, which consists of some 400 volunteer humanitarian aid workers, will thus perform more than 13,500 surgical operations on board and give some 1400 Cameroonian doctors short training courses in order to transfer their skills."

"By the end of my visit of discovery, I am bolstered and reinforced in my commitment, and I share my motivation to support the activities aboard the Mercy Ships with dozens of doctors, carers and co-workers in the Swiss Medical Network. In the months and years to come, they too will immerse themselves in this unique environment and, no doubt, return inspired by the subtle, deep-seated change in understanding that I underwent as part of an unforgettable and totally extraordinary experience."

"I was impressed by the fact that every aspect of the project is so well organized. The result has been a significant increase in humanitarian and medical efficiency as well as an obvious social and cultural impact. The welcome I received was quite perfect. However, the most memorable moment of my trip was undoubtedly my visit to the wards where I began to understand the enormity of the task. The ball is now firmly in Genolier Foundation’s court, and it is up to us to ensure that we participate in this worthwhile project." 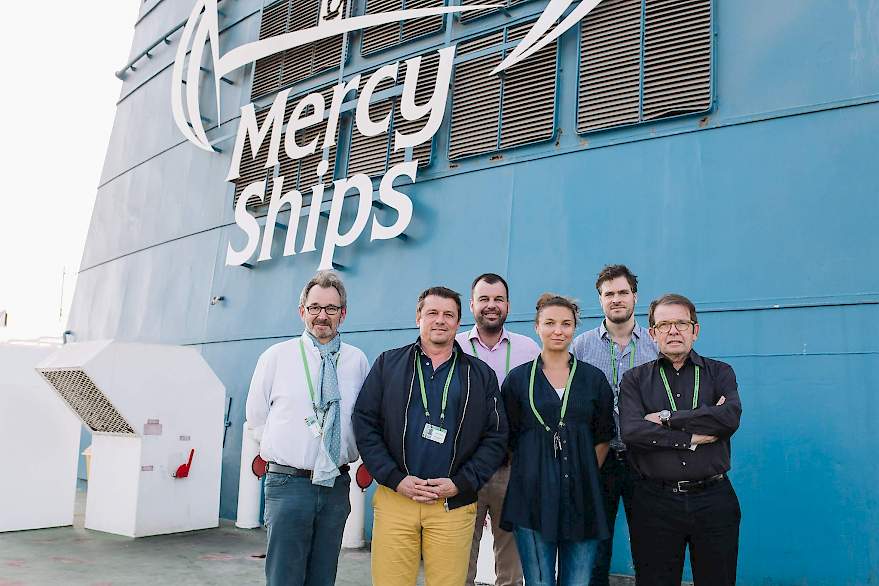